On Monday, November 24th, the Greater Austin Hispanic Chamber of Commerce (GAHCC) released its findings of the 2014 GAHCC Central Texas Hispanic Business Research Study. The goal of the study was to provide an accurate description of Hispanic-owned businesses in Central Texas. Austin-based Zpryme served as the primary research lead for the GAHCC initiative.

“I am pleased that the GAHCC has diversified its business model and is now offering Hispanic business research data on over 9,000 Hispanic-owned businesses in the region,” said Thomas Miranda, Founder and CEO of Sparkovation IT, LLC and 2014 Chair of the GAHCC Board. "Our initial study has revealed a number of insights about the rapid growth of the Hispanic-owned business segment in the Austin region. Our study projects that the Austin area is well on its way to see over 50,000 Hispanic-owned businesses by 2020. While this is the initial study, the plan is to regularly refresh and possibly diversify this data of the Greater Austin Hispanic demographic and be the leader in the region in quality Hispanic business research insights.”

The study explored a variety of topics related to the Central Texas Hispanic 2013 business landscape, including not only size and revenues of the businesses, but also top areas of concern and challenges faced by the Hispanic business owners.

-Under scenario projections in the study, Hispanic-owned businesses could top 51,000 in number and contribute over $12.8 billion in revenues to the Central Texas economy by 2020.

-Transportation and warehousing; information; administrative support; finance and insurance; and the professional and technical services industries experienced the fastest growth over the past five years.

-65% of Hispanic businesses surveyed reported having an undergraduate degree or higher.

The research was possible due to the support of the City of Austin Economic Development Department, Seton Healthcare Family, State Farm, United Heritage Credit Union, Austin Community College, IBC Bank and Capital Metro. “We value our ongoing collaboration with the Greater Austin Hispanic Chamber,” said Kevin Johns, Director with the City of Austin’s Economic Development Department. “It is through these partnerships that we will continue to leverage Austin’s cultural diversity as an economic asset, locally and internationally, furthering cultural innovation within Austin’s economy.”

“We believe small business is big business, and the strength of our economy in Central Texas will be directly related to the success of our Hispanic-owned businesses,” stated Mark Madrid, President and CEO of the GAHCC. “Through our breakout study, not only do we have a gauge on the size and scope of Hispanic businesses, but also the top business concerns of those businesses in personnel management, business operations, finance, marketing and IT. Now, we are working hard to strengthen partnerships to deliver business programming that aligns with those top business concerns. We are committed to catalyzing business growth and profitability for these businesses, which will create wins across the board for our economy.” 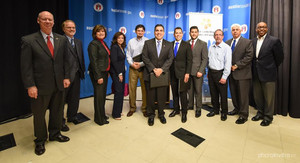